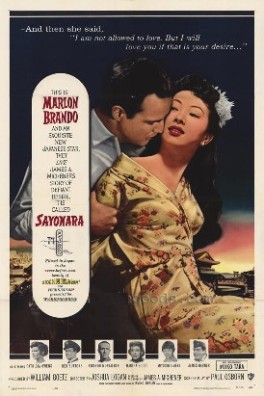 Why does a master lose his touch?

I was wondering this while watching Sayonara (1957), a film that was a big hit in its day, and kind of Guess Who’s Coming to Dinner for the Fifties, but which now seems to be pretty much forgotten. The film’s star is Marlon Brando and it makes you wish he made a hundred films, at least half of them good. You can’t take your eyes off him.

Brando was an international star, hadn’t put a foot too far wrong at this point. He didn’t like the ending of the film so they changed it. His character was from Pennsylvania; they let him do it in a Southern accent. And so on.

At this point Brando was telling other actors: “every scene in every film has a cliché in it. Try to find the cliché and get as far away from it as you can.”

On only one thing did the director refuse to budge. There’s a certain moment in the film which has a profound impact on Brando’s character. Brando wanted to play it hysterical, gnash his teeth, tear his hair. The director wanted him to do nothing more than sit down quietly and say “Oh God.” The director stuck to his guns and the scene came out his way. But it’s possible to look at that moment and wonder: could this be, symbolically, the moment he started to lose his instinct, which up until then everyone said was flawless?

David Puttnam, producer of Chariots of Fire and The Mission, was on the radio recently and he said this happened to him. He said that when he had it – that special quality, whatever you call it – he could hear the music, or the kind of music, that a film required. He knew he was losing it when he would get a script and couldn’t hear the music any more.

In a different field, politics, Lloyd George, offers a spectacular example of this. At one point in his career he was the greatest politician of them all, the Welsh wizard, the man known as the People’s Champion. He lost it too. He spent most of the Twenties and Thirties in the political wilderness. In 1926 Duff Cooper noted in his diary, after hearing the former Prime Minister speak in parliament: “I never heard Lloyd George worse – every fact, every figure, every date was wrong.” By the mid-Thirties Lloyd George’s genius was totally dissipated. Of Hitler he was saying: “I never doubted the fundamental greatness of Hitler as a man. I only wish we had a man of his supreme qualities at the head of our country today. Mussolini is temperamentally an aggressor. I have never thought that Herr Hitler was, and I do not believe it now.”

What happened to these men?