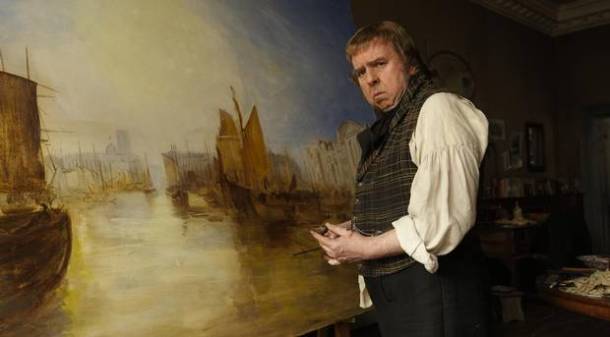 The biopic is a bad enough genre. Even worse is the film that focuses in on one aspect of the genius’s life and work. They seem to be getting more and more popular: Hitchcock making Psycho…Allen Ginsberg writing Howl…Marilyn Monroe taking a few days off while from filming in the UK (My Week With Marilyn, 2011)…FDR entertaining the King and Queen of England for a few June days in 1939 (Hyde Park on Hudson, 2012)…

And now, from Mike Leigh, a film about JMW Turner, Mr. Turner.

Next on the list: Picasso painting either Les Demoiselles d’Avignon or Guernica; the Wright Brothers as they struggle to make the first flight; a fictionalized life event that made Edward Hopper paint Nighthawks…And the life of Tamara de Lempicka.

Mr Turner looks like another classic of the genre: “Here are things that happened to this notable person over the last twenty-five years of his life…”

But will they stop? No, they just awarded Timothy Spall the Best Actor award at the Cannes film festival – for, it would seem, reprising his portrayal of Winston Churchill from The King’s Speech…