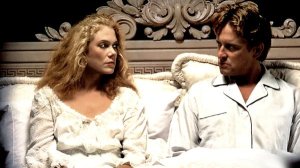 We watched The War of the Roses the other night. I hadn’t seen it since I was a kid. Then, I thought it was a comedy. A husband and wife fighting over things – of course it was a comedy. Now I’m thirty-one, married, and I found watching it stressful.

And you know another thing I can’t do anymore? I used to stamp on snails. I’m telling you. My Dad would encourage it. He’d bring me out to the garden and we’d find them. Not just snails that were sliming along the path. No, he’d go and get ones that were making their way up the back wall – fleeing, for all we knew – and he’d pick them off and throw them on the ground for me to stamp.

I just can’t do that anymore. I came home the other night. It was dark. I stood on one as I was putting the key in the door. I’m telling you. I heard the sound and I nearly started crying.

I’m afraid I’ve become more humane, but I can’t have, I just can’t. But then again, you hear people saying that about time. That it’s cruel. It changes you.